A Theological Exposition of Sacred Scripture

The Concordia Commentary series is designed to enable pastors, professors, and teachers of the Word to proclaim the Gospel with greater insight, clarity, and faithfulness to the divine intent of the biblical text. This landmark work will cover all the canonical books of the Old and New Testaments, interpreting Scripture as a harmonious unity centered in the person and work of Jesus Christ. Every passage bears witness to the Good News that God has reconciled the world to himself through our Lord’s life, death, and resurrection. This scholarly commentary series fully affirms the divine inspiration, inerrancy, and authority of Scripture as it emphasizes “that which promotes Christ” in each pericope. 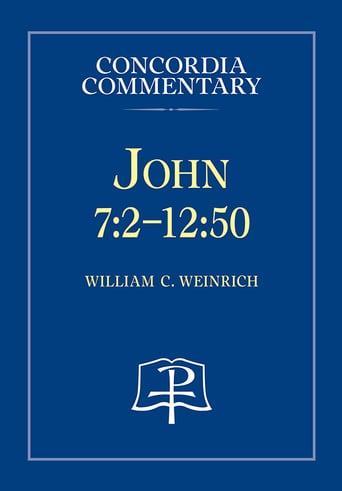 This second commentary volume on the Gospel of John continues in John 7 with verse two reading as a heading for the new section. The four chapters of John 7–10 present the central narrative of Jesus’ public ministry in Jerusalem, characterized throughout by his presence in or near the temple. John 11 and John 12 serve as the “last section” of the account of Jesus’ public ministry. It contains the “final sign” and three scenes which mark “the close” of Jesus’ public work. Weinrich explores essential imagery, significant narrative devices, and historical interpretation of the Book of Signs.

William C. Weinrich is professor of early church and patristic studies at Concordia Theological Seminary, Fort Wayne, Ind., where he has taught since 1975. During his tenure at the seminary, he has served as supervisor of the STM program (1986–1989), dean of the graduate school (1989–1995), and academic dean (1995–2006). He also served the Evangelical Lutheran Church of Latvia as rector of its theological school, the Luther Academy, in Riga, Latvia (2007–2010). He served The Lutheran Church—Missouri Synod as third vice-president (1998–2001) and as fifth vice-president (2001–2004). He retired at the rank of lieutenant colonel from the Indiana Air National Guard after serving as chaplain (1978–2004).

Weinrich’s ability to extract detailed exegetical insights from all epochs of church history, including the most important contemporary voices, and merge them into an intriguing overall view of John’s theology is outstanding. Thus, he equips exegetical scholars and parochial preachers as well as educated laypersons with an excellent and reliable resource. Anyone who reads this commentary will get acquainted with Christ’s person, proclamation, and saving work in a most beneficial and strengthening way. —Dr. Armin Wenz, Professor for Biblical Theology and New Testament Studies at Lutherische Theologische Hochschule, Oberursel, Germany

In this masterly commentary, Weinrich astonishes the reader by the range and depth of his scholarship. It reaches back to the whole Old Testament as God’s prophetic Word, across the New Testament in its testimony to the crucified Lord Jesus, and forward to doctrinal reception of John’s Gospel by the church. Its breadth is matched by the depth of its careful literary analysis, balanced theological reflection, and winsome liturgical sensitivity. —Dr. John W. Kleinig, Emeritus Lecturer in Biblical Studies, Australian Lutheran College, the University of Divinity, Adelaide, South Australia

“I have a great deal of respect for this series. It takes serious regard of the biblical text in its original language, and deals with both textual difficulties and theology—an impressive feat at a time when many commentaries are trying to avoid difficult details.”

“Pastors and scholars alike will find plenty of helpful insights . . . in the series as a whole.”

“One of the best commentary series currently available for those seeking an exposition of the biblical text that balances the academic with the pastoral.”

“I wish to affirm what you are doing to present such a comprehensive, solid, biblically based, doctrinally faithful, Christ-centered commentary series!”

“This series is an excellent resource for ministers and scholars. It combines detailed textual comments, solid and clear exposition, and important theological reflection on the biblical text. Most importantly, it does not forget that Christians should read the Old Testament in the light of the coming of Christ. I enthusiastically encourage all, especially ministers, to add this commentary series to their library.”